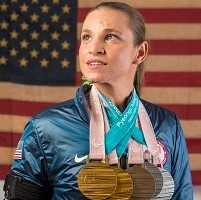 Masters was born in Ukraine, with both of her legs damaged by in-utero radiation poisoning from the Chernobyl nuclear reactor incident. She was born with six toes on each foot, five webbed fingers on each hand and no thumbs. Her left leg was six inches shorter than her right and both were missing weight-bearing bones. She was diagnosed with Tibia Hemimilla. After living in three orphanages, she was adopted at the age of seven. Over the course of seven years, she would have both legs amputated. At age 13, she began rowing. In 2011, she met her rowing partner Rob Jones, and in 2012 brought home a bronze medal from the Paralympic Games London 2012. She began skiing immediately after, training for 14 months leading up to the Paralympic Winter Games Sochi 2014. She would leave Russia with a silver and bronze medal. Due to a back injury after Sochi, she took up cycling as a recovery process and to help maintain her fitness. She qualified for the Paralympic Games Rio 2016 and finished just off the podium in fourth in the road race.