Nordic Skiing includes cross-country skiing and biathlon events. Cross-country races range from 800 meter sprints to 20 kilometer distances, depending on class and gender. Biathlon combines elements of cross-country skiing and rifle shooting. Athletes ski three or five loops, stopping after each loop to shoot at targets. For each missed shot, athletes either ski a penalty lap or have one minute added to their final time for each missed shot. Paralympic Nordic competitions are open to male and female athletes with physical disabilities such as amputation/limb loss, blindness/visual impairment, spinal cord injury/wheelchair users and cerebral palsy/brain injury/stroke.

Downhill racing started as a demonstration event at the 1980 Paralympic Games in Norway. The giant slalom was first a demonstration event in 1984, and mono-skiing was introduced in the Alpine and Nordic events in 1988 at the games in Austria. The Alpine disciplines include Downhill, Slalom, Giant Slalom, Super-G, and Super Combined races. Paralympic Alpine Skiing competitions are open to male and female athletes with physical disabilities such as amputation, blindness/visual impairment, spinal cord injury/wheelchair users and cerebral palsy/brain injury/stroke. 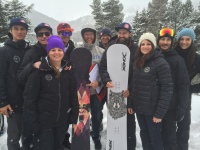 Currently, Paralympic Snowboarding consists of two events: Snowboard cross and Banked Slalom. Both events take place on a man-made course constructed from a variety of terrain features, such as bank turns and various types of jumps and rollers. Snowboard cross is a competition in which athletes take individual timed runs down a course, and the fastest run time seeds that athlete into a bracket where he/she will then compete head-to-head to advance. Banked Slalom consists of individual timed runs and the athlete with the two best combined runs wins. Both events are offered to upper and lower limb disability standing athletes.